Frozen Peas In An Old Tin Can by Stolen Thread Productions CIC @ The Way Theatre, Atherton 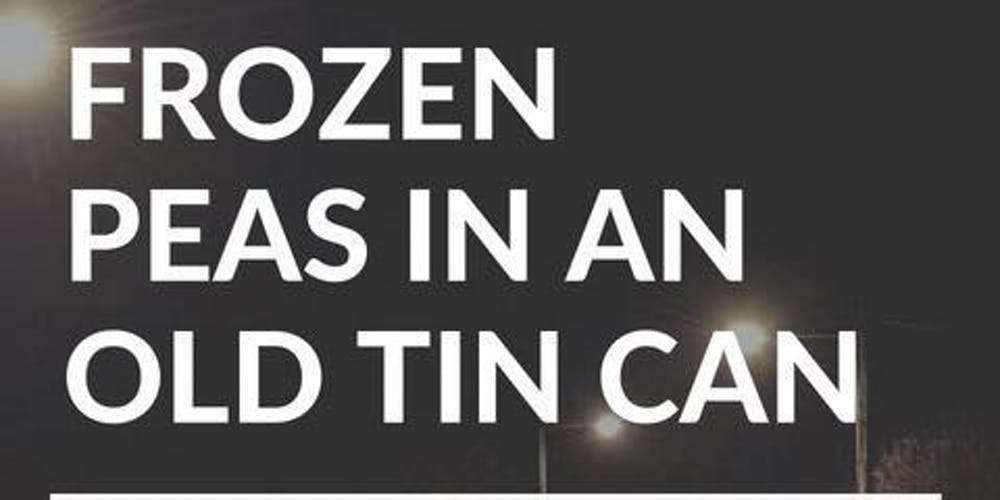 Waiting in the atmospheric foyer of The Way Theatre, with stunning lighting and comfy furniture, I could feel a buzz in the air, warmth with love, for the first of two nights of Joe Walsh’s debut play ‘Frozen Peas In An Old Tin Can’. I got my drinks and snacks from the bar and sat to read the programme. It gave me an inkling that the genre was going to be a comedy. What I failed to realise is this was no ordinary comedy. This comedy had heart and waves of it.

Frozen Peas In An Old Tin Can tells the story of Sarah, Derek and Barney who all live on the streets of Manchester together, sharing one thing in common – they are homeless. They pass their days collecting McDonald’s vouchers on the back of bus tickets, when one day it all changes.

Walking into the auditorium, I firstly noticed the simple but very effective set – an old A Board, litter bin, empty sweet wrappers, drink cans, cardboard box and a car wheel. Waiting in position, ‘sleeping’ on the floor, were two cast members. Straight away I knew the setting of the piece; we were outside in the street. The audience sat in a thrust arrangement.

At the start of the play we are introduced to Sarah (played stupendously by Leah Gray) and Barney (portrayed phenomenally by Paul Tomblin). We quickly learn that Sarah and Barney have a fascinating relationship and have adapted well to living together on the streets of Deansgate in their ‘fort’. What is interesting about the pair is that, take away the fact that they are homeless, they still have the same relationship complexities as people in a more familiar environment. We soon meet Derek (performed by the talented Craig Hodgkinson) who sets the trio on a mission to better themselves by forming a band in order to raise funds and escape to Southport. When Sarah bumps into old school friend Dorinda (superbly acted by Jenny McIntyre), we see two people who met at school but have taken two different paths – Dorinda works in a shop job. Here Sarah shows insecurities about the situation she has found herself in, which contrasts her more positive feelings in the prior scene. This play reminds us that we often worry about people judging us and our misfortunes and knocks. I think the audience would rather hang out with these characters than someone who would look down their nose at them because they had joy and they had soul.

The production was so well cast, with the actors committing to every line and emotion. The characters were very real and were all relatable in their own way. It reminded that homeless people are human and they have spirit and try to make the best out of their situation. You realise anyone could fall onto hard times. The play was never contrived or manipulative and moved along smoothly with neat scene transitions.

Sadly, I feel there has been some controversy with the media and the homeless, especially after the incident with the Manchester Arena Bombing. So Walsh has made a powerful, brave and important move writing this play. Every line of the play was pure gold, with current references to popular culture – including Barry Chuckle and Oasis, which even had the audience clapping along to the rendition. The choices in direction were made to perfection, never getting lazy. There was some very solid audience interaction, maybe some of the best interaction I’ve ever seen, which resulted in Barney blagging a Malteser from the audience member beside me. This great skilled interaction was also aided by the seating arrangement, with audience being close to the action, making you feel as though you were living on the street with them.

I did hear that there was a Q and A after the Performance on the second night, which I would have loved to have gone to, but the show did speak for itself, so did the laughter, smiles and tears you could see all around from audience members.

I think this play has so much going for it and hope to see it travel to other venues with some good promotion behind it as I think it is a very needed, urgent and topical play right now. It’s unusual to talk about a comedy in this way, especially when the comedy is funny on every line, it is hard to get a strong, perhaps even political message across. I feel this play could really be one of the vital plays of 2018.

I had a really fantastic night and I can’t wait to see another production written/directed by Joe Walsh or another show at The Way Theatre. If you haven’t visited this new theatre before, I urge you to go. A nice touch was that the venue had a free car park. It’s one to watch.