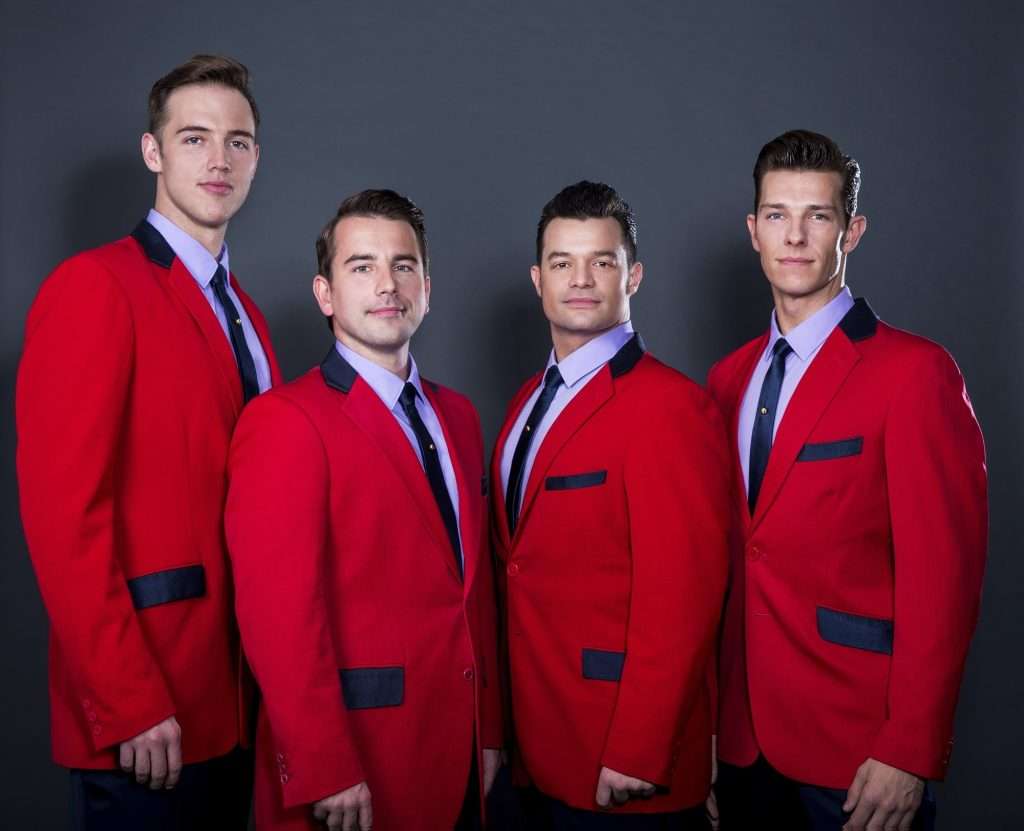 Due to overwhelming demand, a further 12 dates have been announced for the second UK & Ireland Tour of the Tony, Olivier and Grammy Award-winning musical JERSEY BOYS, including the Palace Theatre Manchester from Tuesday 29 January – Saturday 16 February 2019, taking the tour through to March 2019.

JERSEY BOYS is the remarkable true story of Frankie Valli and the Four Seasons and their rise to stardom from the wrong side of the tracks.  These four boys from New Jersey became one of the most successful bands in pop history, were inducted into the Rock & Roll Hall of Fame and sold 175 million records worldwide, all before they turned 30.  The show is packed with their hits, including Beggin’, Sherry, Walk Like A Man, December, 1963 (Oh What a Night), Big Girls Don’t Cry, My Eyes Adored You, Let’s Hang On (To What We’ve Got), Bye Bye Baby, Can’t Take My Eyes Off You, Working My Way Back to You, Fallen Angel, Rag Doll and Who Loves You.

The producers are also delighted to announce that Michael Watson will be playing Frankie Valli, Simon Bailey will be Tommy De Vito, Declan Egan will be Bob Gaudio and Lewis Griffiths will be Nick Massi.  Michael, Simon, Declan and Lewis have all previously performed their roles in JERSEY BOYS to great acclaim: Michael and Simon in the West End, Declan in the West End and Australia, and Lewis in the first UK and Ireland tour.  Dayle Hodge will return to the production to play Frankie Valli at certain performances.

Michael Watson made his West End debut in We Will Rock You and was also in the original London casts of Imagine This, Sister Act and Shrek the Musical. A founder member of theatre super-group Teatro, Simon Bailey also played Raoul in The Phantom of the Opera.  His other West End credits include I Can’t Sing: The X Factor Musical and We Will Rock You. Declan Egan played the role of Bob Gaudio in JERSEY BOYS in his native Australia and has toured the USA in The Book Of Mormon.  Lewis Griffiths played Johnny Castle in the recent tour of Dirty Dancing.  He also appeared in the original UK touring productions of Ghost – The Musical and Legally Blonde – The Musical.  Dayle Hodge made his West End debut as Chip in the original London cast of Disney’s Beauty and the Beast and has appeared in Les Misérables, Chitty Chitty Bang Bang and Scrooge.

JERSEY BOYS first opened in London at the Prince Edward Theatre on 18 March 2008 and moved to the Piccadilly Theatre in March 2014. The Olivier Award-winning West End production closed on Sunday 26 March 2017 following nine amazing years in London. The first UK & Ireland Tour of JERSEY BOYS was a record-breaking success and ran for 18 months, from 4 September 2014 to 5 March 2016.

Winner of Broadway’s Tony, London’s Olivier and Australia’s Helpmann Awards for Best New Musical, JERSEY BOYS is the winner of 57 major awards worldwide and has been seen by over 25 million people worldwide.  JERSEY BOYS can currently be seen across the United States on its US National Tour.  The BROADWAY production closed on 15 January 2017 as the 12th longest running show in Broadway history.  JERSEY BOYS will return to New York City in a new production in November 2017 at New World Stages.

JERSEY BOYS is written by Marshall Brickman and Rick Elice, with music by Bob Gaudio and lyrics by Bob Crewe.  The UK & Ireland Tour production is staged by the entire original Broadway creative team, led by director Des McAnuff and choreographer Sergio Trujillo, with scenic design by Klara Zieglerova, costume design by Jess Goldstein, lighting by Howell Binkley, sound by Steve Canyon Kennedy and projection design by Michael Clark.  The orchestrations are by Steve Orich and the music supervision and vocal arrangements by Ron Melrose.