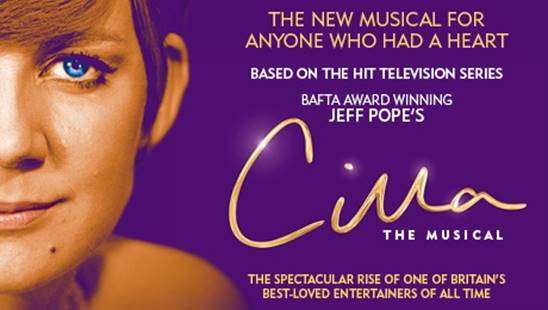 The full casting has finally been announced for the World Premiere of ‘Cilla the Musical‘, following weeks of open auditions up and down the country. Andrew Lancel and Carl Au join the cast of Cilla the Musical written by BAFTA® award winning Jeff Pope, with its world premiere at the Liverpool Empire on 7th September. The show will also visit Manchester’s Palace Theatre and Chester’s Storyhouse.

They join the previously announced Kara Lily Hayworth as Cilla, who beat thousands of hopefuls in nationwide open auditions for the coveted role.

The musical reunites Tom Dunlea, Michael Hawkins and Gemma Brodrick-Bower, all of whom starred in Jeff Pope’s original ITV mini-series Cilla, on which the musical is based. It also reunites Andrew Lancel with the role of Epstein, which he played on stage to great critical acclaim in Epstein – The Man Who Made The Beatles. Andrew is best known to TV audiences as super-villain Frank Foster in Coronation Street and as DI Neil Manson in the long-running ITV television series The Bill.

The legendary Merseybeat sound is authentically performed live on stage by the cast who are completed by: Alan Howell; Jay Osbourne; Alex Harford; Will Kinnon; Jenny Murphy; Tom Sowinski; and Christopher Weeks.

CILLA – THE MUSICAL is the spectacular and heart-warming musical adaptation of the critically acclaimed hit ITV television series by Bafta-Award winner Jeff Pope (The Moorside, Philomena, From The Cradle To The Grave, Mrs Biggs and the acclaimed Little Boy Blue which had ITV audiences glued to their screens). It tells the extraordinary story of the ordinary girl from Liverpool whose teenage dreams of stardom lead her to becoming one of Britain’s best-loved entertainers of all time.

It’s an introduction by a young John Lennon to music mogul Brian Epstein that changes Priscilla White’s life forever. By the age of just 25 she would be known as singer and TV Star Cilla Black, Number One selling artist and at the fore-front of the Brit-Pop music scene. The musical score is the ultimate soundtrack to the 60’s including Cilla’s greatest hits Anyone Who Had a Heart, Alfie and Something Tells Me, Twist and Shout by the Beatles, California Dreamin by The Mamas and The Papas’ and many more.

Visit www.cillathemusical.com for all the latest tour and audition information