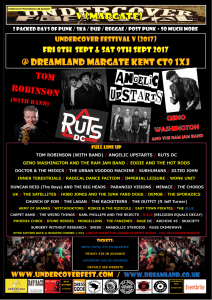 A 2 day celebration of alternative music including Punk / Ska / Dub / Reggae / Alt + so much more.

“See You Down The (Sea) Front”

Plus so much more over 2 packed days.

Undercover Festival now in its FIFTH year are moving to the unique and quirky setting of Dreamland Margate in Kent.

Undercover a festival venue and experience that defies all other conventions and festival templates, not only do we have a cracking alternative line up but festival goers can experience many retro rides and amusements plus it is once again held undercover i.e. not outdoors so if it’s peeing down come September it’s not a problem and your beer won’t get diluted. Leave your wellies at home, and enjoy one of the best small alternative festivals the South has to offer this September.

“Dreamland in Margate is exactly what we have been looking for as a venue, quirky, retro and just right for our alternative music festival” said Festival Organiser Mick Moriarty.

Undercover Festival V boasts Acts such as Tom Robinson (with band), Angelic Upstarts, Ruts DC, Geno Washington & The Ram Jam Band, Jilted John, Doctor& The Medics, Eddie and The Hot Rods, Subhumans, The Urban Voodoo Machine, Wonk Unit, Inner Terrestrials, Imperial Leisure, Chords UK, Radical Dance Faction along with a very strong supporting line up of established and up and coming bands, plus many Kent bands that to any lover of alternative music will find more than appealing.

“We believe that the Undercover Festival V Line Up Is Stronger Than Ever Before,” say festival organisers “especially as the legend that is Tom Robinson with band have announced that Undercover Festival is the only event they are playing across the South East as a full band for 2017 and we are so looking forward to welcoming Tom and band to Undercover”

The feedback we are getting is that people are up for this festival especially from Kent and we expect tickets to sell out so our advice to everyone is get in quick to avoid disappointment.

With the recent announcement of the involvement of Scootering Magazine things are going from strength to strength for the festival.

The festival is one that prides itself on taking an independent and grassroots approach to things, and is always determined to be different from mainstream events, with two days of alternative action from bands you’d be highly unlikely to see on many other festival line-ups.

“Being a small independent grassroots festival is tough because media attention is always on the big boys. But we’ve got through to our fifth year and we’re going strong because what we have created really has struck a chord with people who like their music raw and full of the passion and energy that only acts like ours generate.”

The festival now in its fifth year grew out of a small tent tucked in the back corner of the sadly departed GuilFest in Surrey and has now become a firm fixture in many people’s diaries, with dedicated fans coming back year on year.

In a financial climate where it always seems to be about the money, Undercover throws convention to the wind and just goes with what it believes in. There is a huge line up and tickets can be bought in advance online of from various locations details from www.undercoverfest.com

Details of Dreamland plus you can also get tickets from them as well www.dreamland.co.uk

January 13, 2021January 13, 2021
Arts Mag
St Helens Theatre Royal have today announced they will extend the online version of their 5-star socially distanced production of Beauty and the Beast until...
November 26, 2020November 27, 2020
Arts Mag
Many Theatres and Production companies due to perform shows this December have been dealt a crippling blow. New COVID-19 Tier systems assigned by the Government...
November 4, 2020November 4, 2020
Arts Mag
Regrettably, a second UK Lockdown has been announced by Prime Minister Boris Johnson, which means further closures within an industry that was already struggling to...
July 20, 2020July 20, 2020
Arts Mag
Manchester-based theatre company JustOut Theatre have launched JustOut Stays In, a weekly radio play series producing the work of Northern-based creatives. The plays are unique,...
July 18, 2020July 18, 2020
Arts Mag
Manchester based production company Cherwell Productions have been enjoying success with the release of their latest project, featuring a fantastic cast. The award-winning short film,...
July 17, 2020July 18, 2020
Arts Mag
After months of closures due to the COVID-19 pandemic, UK theatres and music venues have been facing immense pressures, with many establishments already closed and...