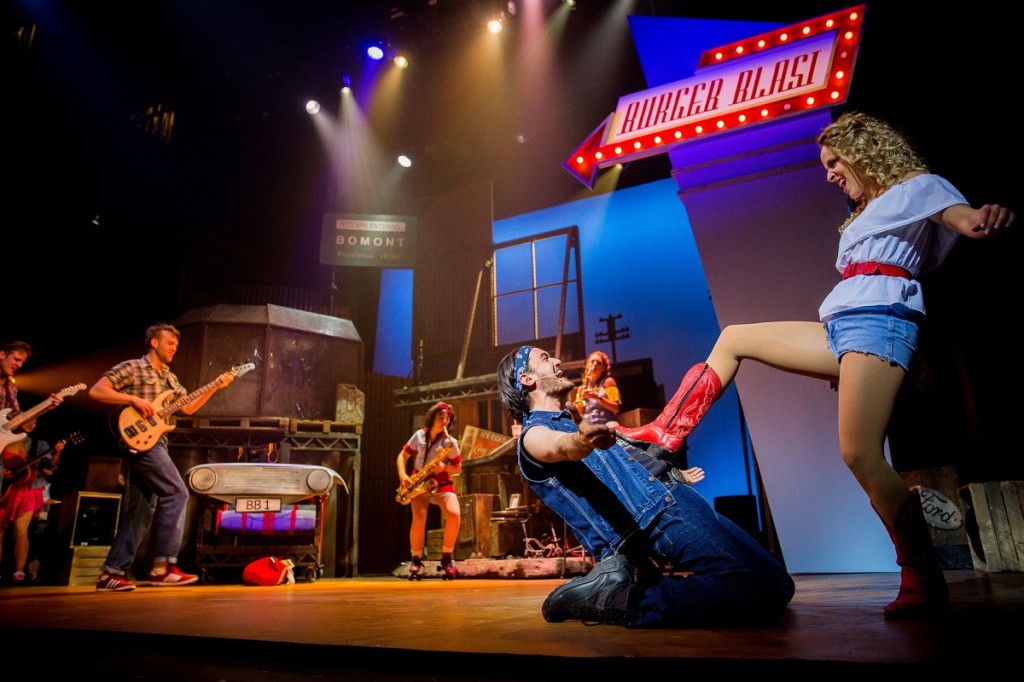 THE SMASH HIT PRODUCTION ON ITS DEBUT VISIT TO CHESTER

PLAYING AT STORYHOUSE FROM 5 TO 9 SEPTEMBER

WITH MAUREEN NOLAN AS VI MOORE

Following an acclaimed 2016 UK Tour, worldwide smash hit musical Footloose: The Musical will burst back onto the stage in 2017, opening the inaugural touring season at Storyhouse, Chester’s brand new £37m theatre, cinema and library, from 5 September for one week only.

Based on the 1984 screen sensation starring Kevin Bacon, Footloose: The Musical tells the story of city boy Ren, who has to move to a rural backwater in America where dancing is banned. All hell breaks out as Ren breaks loose and soon has the whole town up on its feet. Featuring classic 80s hits including Holding Out for a Hero, Almost Paradise, Let’s Hear it for the Boy and the unforgettable title track, Footloose: The Musical is set to take the world by storm once again in this brand new production, bursting with youthful spirit, dazzling dance and electrifying music.

When the film was released in 1984, it became the highest-grossing February release in US film history.  The soundtrack album ended the year-long reign of Michael Jackson’s Thriller at number one and went on top album charts all over the world, eventually selling in excess of 17 million copies.  Footloose was nominated for a Golden Globe, and both the title song and Let’s Hear It for the Boy received Academy Award nominations. Footloose: The Musical first opened on Broadway in 1998 where it ran for 709 performances, with a London production following in 2006, opening at the Novello Theatre following a UK Tour.

The cast features Maureen Nolan as Vi Moore. Maureen has been singing with her sisters since she was nine years old, when they became one of Europe’s first girl bands, The Nolans. Best known for their smash hit single I’m in the Mood for Dancing, The Nolans enjoyed phenomenal record sales worldwide, and worked with some of the world’s most respected artists including Frank Sinatra. On stage, Maureen has played Mrs Johnstone in Blood Brothers in the West End and on tour to critical acclaim. She was the fourth Nolan sister to play the role, earning them entry into the Guinness Book of World Records. Other credits include Sadie in Girl’s Behind, Jill in Mum’s the Word and Sarah in The Naked Truth.

Footloose: The Musical has music by Tom Snow and lyrics by Dean Pitchford, and is adapted for the stage by Dean Pitchford and Walter Bobbie. It is based on the original screenplay by Dean Pitchford. It is directed by Racky Plews (American Idiot, West End) with choreography by Matthew Cole, design by Sara Perks and musical supervision by Mark Crossland. It is produced by David Hutchinson and Phillip Rowntree for Sell A Door Theatre Company, Tristan Baker and Charlie Parsons for Runaway Entertainment, Jason Haigh-Ellery and Stephen McGill Productions. It is presented by arrangement with R&H Theatricals Europe.

Tickets start from £20.50, Storyhouse has a dynamic pricing policy on the majority of shows, ensuring that the earlier you book your tickets, guarantees the best seats at the lowest price.

January 13, 2021January 13, 2021
Arts Mag
St Helens Theatre Royal have today announced they will extend the online version of their 5-star socially distanced production of Beauty and the Beast until...
November 26, 2020November 27, 2020
Arts Mag
Many Theatres and Production companies due to perform shows this December have been dealt a crippling blow. New COVID-19 Tier systems assigned by the Government...
November 11, 2020November 22, 2020
Arts Mag
BEAUTY AND THE BEAST OPENS IN JUST 4 WEEKS ST HELENS THEATRE ROYAL'S DOORS OPEN FOR THEIR MAGICAL PANTO THIS CHRISTMAS The Christmas countdown has...
November 4, 2020November 4, 2020
Arts Mag
Regrettably, a second UK Lockdown has been announced by Prime Minister Boris Johnson, which means further closures within an industry that was already struggling to...
July 20, 2020July 20, 2020
Arts Mag
Manchester-based theatre company JustOut Theatre have launched JustOut Stays In, a weekly radio play series producing the work of Northern-based creatives. The plays are unique,...
July 18, 2020July 18, 2020
Arts Mag
Manchester based production company Cherwell Productions have been enjoying success with the release of their latest project, featuring a fantastic cast. The award-winning short film,...