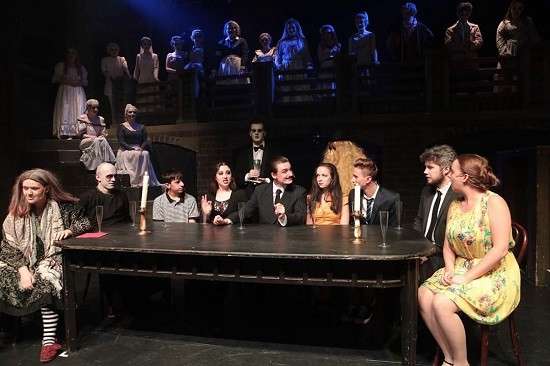 Presented by Meighan Youth Theatre. A company of young actors and actresses aged, I would imagine, between 15 and early 20s.

I have to say this was a Musical I didn’t know anything about and one which I really was not particularly looking forward to. I am not a huge fan of things I would classify as ‘comedy for comedy’s sake’ and I certainly don’t like cartoon strips, so I took my seat last night with a certain amount of trepidation!

What I expected to see was mono-dimensional cardboard cut-out characterisations and a very glitzy tintzy off-Broadway style music score; when in fact the only cardboard cut-outs that I did see were a few trees. [which I hated and don’t think worked at all – but we’ll gloss over that!] The characters were fully-rounded, real and believable [in Musical Theatre terms], and the music score was much fuller and more mature than I could ever have imagined. And from the moment the first character stepped on stage, you had me! The quality of the acting, singing and characterisations were absolutely amazing and a huge testament to both director, Joseph Meighan, and the talented young cast he had to work with.

I still don’t like the show, and wouldn’t go out of my way to see it again, but I appreciated the talent displayed greatly. To think that the whole show was put together in less than two weeks is also something of a mini-miracle. I have been working in the profession for many years and the usual length of rehearsal time for a full-scale Musical is three weeks; [low budget stuff maybe two weeks….], but generally three; and so you have done something which the pros wouldn’t normally even consider, and pulled it off quite expertly.

The Addams Family was a creation of American cartoonist Charles Addams in the 1930s, first appearing as a cartoon strip in newspapers, then going on to animated and live TV series’ and then in 1991 a film, with two further spin-offs. I have never seen any of them in their entirety; switching the film off after about the first ten minutes! However, from what I do remember of these spoof-macabre, highly American-humoured cartoons the characters presented to me last night were just about as close to the originals as anyone is ever going to get.

There are basically two sets of protagonists, as rather surprisingly, the Musical gives more time and story to Morticia and Gomez than it does to the young lovers. In this production Morticia was played sublimely by Sasha Carrillo De Albornoz, and her rather comical, slightly hen-pecked husband Gomez was Sam Cain, giving a performance of a lifetime. I loved his obsequiousness and bravado and his comedy timing was superb. The Addams family also consists of Uncle Fester; played here with aplomb and easy style by Chris Wagstaff; Pugsley, played with child-like petulance and sincerity by Zach Atkinson; Grandma, played with relish and a twinkle in the eye by Niamh Mullvihill; with a slow-moving and monosyllabic Lurch, (except at the end when he really did find his voice!) played by Jackson Hayes; and of course the other protagonist, Wednesday Addams, who was played here with stubborn resolve by Lara Hancox.

The ‘normal’ family from Ohio comes in the form of love interest Lucas played by Sam Berrie. [incredibly reprising his role of Ren from Footloose – it was uncannily similar!], and his parents, Mal (Joseph Morgan) and Alice (Jessica Heaps). I really loved Heaps’ moment of ‘full disclosure’ at the end of Act 1. Excellently performed.

So, the stage is set. In the first act we see this disfunctional family and learn that Wednesday is in love. A dinner is planned for the Addams’ to meet the parents of her affections and for her to announce her intention to become engaged to Lucas – the boy of her dreams. How will a ‘normal’ family ever come to terms with the nefarious and hazardous life-style of the Addams Family, who think nothing of being tortured for pleasure and killing is a way of life? And will they be able to act ‘normally’ just for one evening in order to please Wednesday and bless this union?… well the answers to these questions come in Act 2, and so if you want to know the answers, go and find out for yourselves! The show runs until Saturday evening.

One of the highlights of the evening for me though came in the form of the chorus. The Musical would stand up on its own quite easily without them – but with, them, or at least with THIS chorus, it really made a huge difference to my enjoyment of the show. Dressed in costumes of decades or eras past, and all in white they were the ghost ancestors of the Addams’ family, and their participation in the show was no small or insignificant part. The choral singing was a joy, and the small amount of choreography was good and appreciated.

Other highlights included (and I’m struggling now because I don’t know the titles to any of the songs) but here goes – Death Is Just Around The Corner, Happy And Sad, What If, and Fester’s Moon Song.

For me, then the set took up too much room and gained too much precedence. A large walkway (or bridge) above the band and two large platforms with steps leading down to the main stage. It didn’t look scary or ‘ooky’ enough at all, and perhaps it also should have been mock Gothic in architectural style. Sadly it didn’t work for me. Costumes and make-up though did. All were wonderful. { I am just wondering why Wednesday appears at the beginning of Act 2 in black. Surely at this point in the narrative she should still have been in yellow? } And the main props used for the show, the torture chair, a stretching rack, and a large black dining table all looked good and worked well.

The lighting was sad to say, the worst thing about the evening. There were huge blackspots on the bridge, several other spots and cues were off, and cast were left singing in semi-darkness far too long. Also, the mic levels were not right either, and on a couple of occasions, especially in the first act, solo singers were being drowned out by the band. – especially Wednesday’s solos unfortunately.

All in all though this was a very professional and highly enjoyable diversion from the daily grind. It is frivolous and inconsequential at best, but listen out for some very clever and witty throw-away lines. It won’t be everyone’s cup of tea; it really wasn’t mine, but I still managed to enjoy it for what it was, and appreciated the talent, hard work, blood, sweat and tears that had gone into its production. Hearty congratulations to all!

October 16, 2018July 18, 2020
Stevie Helps
Frozen Peas In An Old Tin Can by Stolen Thread Productions CIC @ The Way Theatre, Atherton Directed by Joe Walsh | Reviewed Fri 12th October 2018 Reviewer Rating: Waiting in the...
July 22, 2016November 11, 2020
Alastair MacDougall
Reviewer Rating: Not everyone knows the wonderfully tragic-heroic novel by Victor Hugo, but I think almost everyone will know something at least about one of...
July 8, 2016November 20, 2018
Alastair MacDougall
Tommy Cooper is alive and well and performing in Manchester as part of the Greater Manchester Fringe Festival! I was reminded last night of the...
May 17, 2016October 3, 2016
Alastair MacDougall
Willkommen meine Damen und Herren - Das Leben ist ein Kabarett! This was a wonderfully intelligent and extremely professional production which worked on many levels,...
May 4, 2016October 3, 2016
Alastair MacDougall
Somehow, the two don't seem appropriate to write together do they? Grand Hotel and Students' Union! However, this dichotomy and juxtaposition of ideas are the...
March 2, 2016November 20, 2018
Alastair MacDougall
Manchester Musical Youth @ The Z-Arts Centre, Manchester Little Shop of Horrors by Manchester Musical Youth @ The Z-Arts Centre, Manchester Words simply cannot do full...