The Skriker by Caryl Churchill @ The Royal Exchange Theatre, Manchester 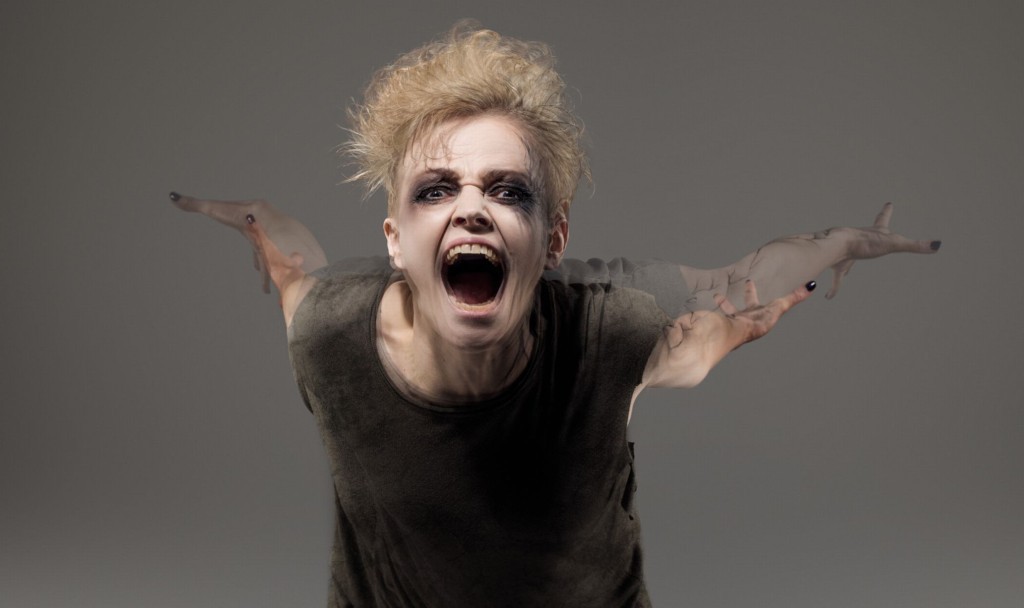 …long before that, long before England was an idea, a country of snow and wolves where trees sang and birds talked and people knew we mattered.

In a broken world two friends meet an extraordinary creature. The Skriker is a shapeshifter. She can be an old woman, a child, a death portent. She is a faerie come from the Underworld to pursue and entrap them, through time and space, through this world and her own.

The Royal Exchange Theatre, under direction of Sarah Frankcom for the Manchester International Festival 2015, have successfully presented a challenging piece of contemporary, immersive theatre. The Skriker, by english feminist dramatist Caryl Churchill, first debuted in 1994 at the Royal National Theatre in London and has since been produced several times, including a stint at New York’s Public Theater in 1996, starring Jayne Atkinson. This time we see critically acclaimed actress Maxine Peake (who recently starred as Hamlet, also at the Royal Exchange) take on the role of the Skriker.

Designer Lizzie Clachan has created a truly inspiring and immersive set for The Skriker; a rustic, contemporary maze of stone and wooden banquet tables with darkened alcoves, ladders and televisions arranged around the circular stage. For the first time the audience are seated on the actual stage itself. Around 70-80 audience members get front row seats to the action, which mainly takes place on the bench tops before them. This seating decision allows for greater audience immersion as actors and ensemble cast wind between seats, and even lead away members of the audience along with their belongings (don’t worry, you won’t miss the show if you are led off by a faerie) during a scene change.

Peake delivers a raw and gripping performance throughout, successfully taking on Churchill’s complex language of the piece which she mostly tackles in her own Salford dialect; this seemed to enhance the grittyness of the brutal, whiny, needy, manipulative, strong and sharp-tongued Skriker. Peake’s shapeshifting character performances throughout are commendable. Laura Elsworthy (playing the selfish Josie) and Juma Sharkah (as Lily) worked well together as the young quarreling friends. They didn’t appear intimidated at all by the big star that is Maxine Peake.

The production features an outstanding ensemble cast who deliver goosebump-inducing, dark, choral performances in the Underworld (well done to composers Nico Muhly and Antony), which hopefully do not go unmissed by the public audience. Choreographer Imogen Knight has succeeded in placing and using the ensemble cast to enhance the fullness and variety of the production for the audience, although at times it was a little difficult to know where to look – particularly when you have to twist and turn in your seat to keep your eyes on the action which is often behind you (assuming you are seated on stage level).

An excellent piece of compelling theatre. Plead, lend and pickpocket to get tickets if you can.